“I’m a dweller on the threshold,
And I’m waiting at the door.
And I’m standing in the darkness.
I don’t want to wait no more.”
– “Dweller On The Threshold”, Van Morrison

I smoked opium once. I saw God.

They say God has many faces. In this instance, she took the form of an elderly Asian woman dressed head to toe in black. She hovered above me – a face creased with age, framed with straight gray hair and punctuated with a toothy, betel nut-stained smile. Who knew how many tourists she’d led down that laneway off Jalan Alor to a day bed in a back room of her meagre food business?

In the wee hours of the morning, the indigenous muffled shuffle of Asian slippers is replaced with the polished ‘clicks’ of visiting Cole Haans and Manolo Blahniks. But the dinner jackets, designer clutch purses and sparkly cocktail dresses fail to upstage the visceral history of the dimly-lit alley. Furtive, illicit glances shared between strangers are followed by faintly perceptible, but knowing nods of acknowledgement: we each know where we’re going and where we’ve been. I was going. It was my first time.

The back room was stifling and the air was a heady mixture of candle wax, opium smoke and French cigarettes. There was a hint of Jasmine tea – it was the one smell that seemed out of place, even in this part of town that was known more for its amazing food than its prohibited pharmaceuticals.

Lying on my side, God held a long, narrow pipe to my inquisitive lips. She mimed taking a deep breath, while genuflecting with her free hand – the international symbol for ‘inhale’. I obeyed as instructed.

I smoked only a small bowl – five hits, maybe six, I have no idea. Within minutes I had seven fingers on each hand. It didn’t matter. The extra grip on the bed didn’t stop the room from moving away from me, alternating between lightspeed and molasses.

“Close eye,” God said, her whisper barely audible above the din caused by the busy propane-fired wok in the next room. Shit – I couldn’t have kept them open if I’d tried. But it wasn’t sleep that took me.

She replaced the wash cloth on my forehead with a fresh cool one. I learned later it was soaked in a mixture of rosewater and mint. I managed to open my eyes, just a sliver, and just for a minute. Salvador Dali swam over to greet me. I giggled, loudly I think. The old woman continued to smile. I tried to smile back, and maybe I did, but my brain was preoccupied with the visions, my body with the feelings. 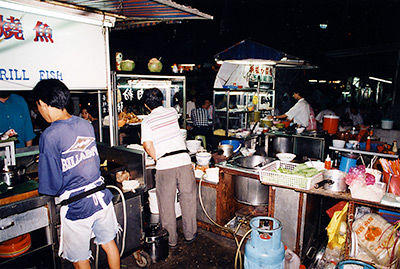 A few hours later I found myself wandering, floating almost, back through the streets of Kuala Lumpur looking for my 5-star, basking in the afterglow buzz, the delicious sounds of the early morning hawker stalls thrumming in my ears. I discovered the city anew that night. And I ate like a pig.

I mention this life-altering event for one reason. Addiction.

I knew once I’d straightened out that it wouldn’t take much for me to make a return trip to see the old woman. Many trips perhaps – the experience was that amazing. I loved it and wanted more – had to have more.

Travel affects me the same way, and luckily it’s the only vice I have. Not alcohol, not drugs – travel. The desire, the need to experience what’s around the corner, around the country, around the world is the only habitual inclination I possess. I simply must travel.

“For my part, I travel not to go anywhere, but to go. I travel for travel’s sake. The great affair is to move.”

That quote is from a man who wrote eloquently about both drugs (The Strange Case of Dr. Jekyll and Mr. Hyde) and travel (Treasure Island). Like many other authors who became famous for their literature, but were first and foremost travel writers – Mark Twain, Evelyn Waugh, and Graham Greene among them – Robert Louis Stevenson’s fiction was a happy consequence of his real-life travels.

And so it is for me. Although my vocation is that of a media creative, my avocation is that of a traveller. It is when, on the all-too-infrequent occasions the two intersect, that I know I have arrived, and the monkey returns once again to my back – I am happy. More importantly, content. I live for those moments.

As for my resolutions, I’ve managed to keep them. All of them. So far.