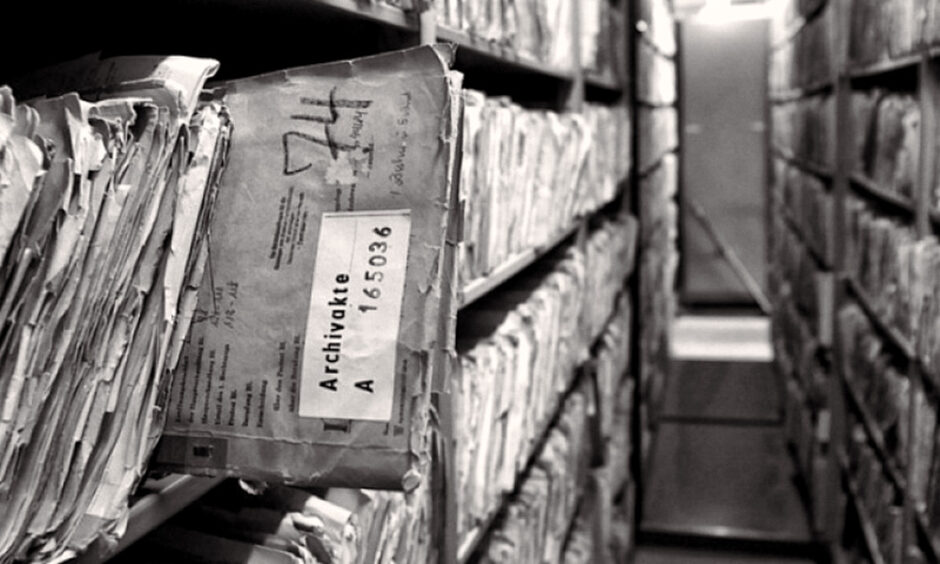 “Then we got into a labyrinth, and, when we thought we were at the end,
came out again at the beginning, having still to see as much as ever.”
~ Plato

Even after all this time (and perhaps BECAUSE so much time has elapsed), artwork and artefacts from World War II are still being discovered. Purloined paintings spirited away by the Nazis during the latter years of the war will always take centre stage, and rightly so. This story, about a looted oil painting, found hanging in a small home in Columbus, Ohio for 20 years, is a good example of what’s still missing and yet to be found. So too, is the recent unearthing (literally, in this case) of the so-called Nazi ‘gold train’ buried deep in Poland.

However, it’s not just precious metals and works of art from the war years that have remained ‘buried’, and eventually discovered in odd places. Documents, maps, letters, paperwork of all kinds continue to show up in long-forgotten, dust-ridden attic and basement boxes in locales that defy simple explanation.

My recent trip to L.A. was initially a short research excursion in support of a new book I’m writing. The job at hand involved viewing and making notes on a recently discovered cache of formal Nazi documents written in 1945 as the Russians closed in on Berlin. Those documents – including a crudely drawn map that lies at the heart of my new tale – were nothing short of eye-popping. But it was the story of how and where they were eventually found that was equally exciting.

No spoiler alert here, but this is the Reader’s Digest version.

As the top echelon Nazis increasingly saw the writing on the wall in the Spring of 1945, much of their work was occupied, not with trying to counterattack the Russian Army who had already infiltrated the Berlin city limits, but rather in attempting to squirrel away and/or destroy documentary evidence of their war crimes. Included in that effort was the mostly successful attempt to find secret repositories for material central to the their basic thesis of a ‘thousand year Reich’ – a FOURTH Reich, as it were, to rise from the ashes and live to conquer again another day, in another place – South America, as it turned out.

Eventually, more than five years later, some of that material ended up in the hands of the East German secret police archives – the Stasi. Amongst that material was a 22-page dossier – the one I made notes on a few weeks ago. How and why Nazi documents found their way into a massive archive in East Germany – a Communist bloc country (the Nazis, of course, were virulently anti-Communist) – is another, far more lengthy story, and odd enough for any researcher. However, it’s what happened to those documents next, in the early 1990s, that confounds imagination.

As the Eastern Bloc Communist manifesto-driven lifestyle began to falter politically and socially, and eventually fail completely in 1989, the Berlin Wall tumbled to the ground. The GDR, or the German Democratic Republic as East Germany was known, was caught completely off guard according to some historians. Two things were becoming abundantly clear to the members of the GDR politburo. Their ‘partners’ in the Soviet Union were going to do nothing about this deteriorating (to them) state of affairs, and, therefore, it would only be a matter of time before everything collapsed, and newly ‘freed’ citizenry would begin storming political offices and trashing or stealing everything in site. The decision within the secret police was to destroy everything. Ironically, this, in fact, is the reason so much Stasi documentation exists to this day.

The Stasi was the largest, most detail-oriented intelligence organization the world has ever seen. It was also the most devious, ruthless, and arcane. Their interrogation techniques were… creative, to say the least. It is said that at one time or another ALL residents of East Germany were working for the Stasi whether they knew it or not. The smallest, simplest detail rarely went undetected by someone, who then either ‘reported’ it to the police, or spoke about it to someone else in a bar, or on the street, and THAT someone revealed the information to someone else, which found its way to the Stasi. A phone number written on a used paper napkin in a small bistro and thrown away by restaurant staff after the meal would be retrieved and presented to the police in hopes that one day this little act of ‘patriotism’ would be remembered and, therefore, deflect any investigation or interrogation of THEM. It’s no wonder that the Soviet KGB would often send their agents to East Berlin for training in ‘technique’.

The Stasi, by design, destroyed nothing. They kept, and cross-referenced everything! As such, they had no incinerators or paper shredders! Their job was to KEEP everything, not DESTROY it – such was the root of their power.

While they scrambled to find incinerators and shredders in other parts of Berlin and beyond, the police concocted another scheme. Staff members of the Stasi (there were literally tens of thousands of individuals and married couples, as it turned out) were tasked with spiriting away bits, pieces, chunks, boxes, and crates of material. One such box was taken into the German countryside by a husband and wife team and hidden away.

After the tumult of the fall of Communism began to fade away, and Germany once again became unified, this couple emigrated to the United States taking some of the Stasi archives with them. The story goes that the 22-page dossier in question was found less than five years ago. In a steamer trunk. In a barn. On a farm. In the fields of Nebraska!

The dossier became part of a larger assemblage of Nazi documentation, and through some deep, forensic research over the better part of two years, I located its resting place.

Its discovery made me dig into what might have happened with the rest of the Stasi archive. Did it survive in some form? How much survived? How much was destroyed – eventually shredded or incinerated? Where is it?

In a large, very secure ‘business park’ within an office/warehouse complex just outside Berlin, lies the Office of the Federal Commissioner for Stasi Records. It is the new international ‘home’ for the Stasi archives. Aside from materials that were ‘taken away’, most of the archive was NOT incinerated, and only a partial amount was shredded, although the word ‘partial’ here is entirely relative.

Inside this complex of buildings, an extensive staff of paid workers, volunteers and even students work tirelessly around the clock, seven days a week piecing back together the entire surviving archive. It is estimated that the job of reorganizing will take decades to complete. Why?

The archive as it now exists comprises almost a billion individual pages of data, which translates to about 111 kilometres of shelf space if it were all laid end to end. That figure doesn’t include 1.8 million photos, negatives, and slides; 30,000 films, videos, and audio recordings; 39 million separate file cards; 47 kilometres of microfilm; and 15,500 garbage bags stuffed with shredded material. Volunteers are painstakingly reconstructing the contents of those bags back into their original individual pages… one shredded sliver of paper at a time. This specialist group is known as ‘the puzzlers’.

Finding a needle in a haystack suddenly seems like so much child’s play!