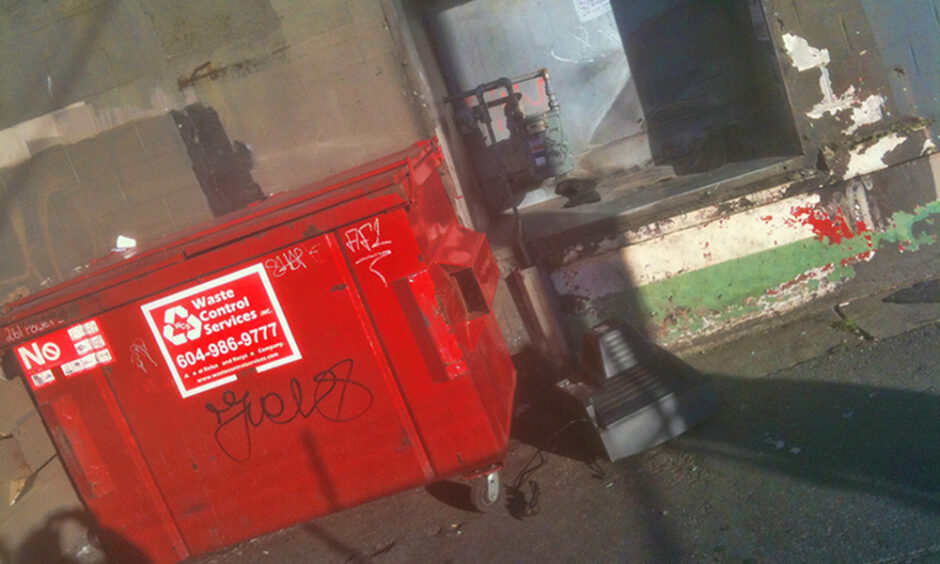 Interactive TV is not an attempt at technical convergence between a computer and a TV set, it is a hybrid of Internet and television content.

Earlier we looked at the failure of Interactive TV back in the Dark Ages (1992), but it doesn’t take a rocket scientist to see the writing on the wall (okay, maybe the screen) when you digest the following:

The concept of interactive TV is never more crystal clear than in the sports genre.

There’s a lull in the action during the hockey game you’re watching on TV. A commercial is coming up. Suddenly, in the upper left corner where the game’s score is usually displayed, you’re presented with a choice of four possible commercials to view during the break.

In this case, Toyota sponsors an interactive commercial by allowing the viewer to choose (via keyboard or remote control) which Toyota commercial they want to watch.

The advantages for the triad (viewer, broadcaster, and advertiser) are obvious. This interactive system is already in trials in the Boston market during Bruins games. It’s another good example of how advertisers have re-invaded the screens.
In another case, a game show is utilizing the Internet to allow viewers/surfers to participate in the contest. However, there is an interesting caveat: if the viewer decides to change channels during the game to check out what else is on, they lose their score and have to start over. Obviously this is an incentive to keep them tuned in. Imagine advertising using this model!

One need only look at the back of the new digital cable boxes to see the future of interactive television (and the Microsoft influence by the way). Both a phone RJ-11 phone connector and a data port are ready and waiting, not to mention a slot for a credit card, the reader for which is already pre-installed!

Finally, if this is a business about content – the acquiring of it, the viewing of it, the managing of it – then Digital Rights Management (DRM) will continue to be a big issue: who owns what, where and when? Again, television and traditional video dictate.

Piracy has been a huge issue for content owners from small producers to large Hollywood conglomerates for years. Television shows that appear in North America may not be seen in Europe, Latin America or Southern Asia until a later date for any number of reasons. Release patterns, distribution schedules or considerations of ‘questionable’ content are all issues that may have to be addressed. I myself have encountered this several times with the censor boards of Singapore, Malaysia, China and India. What do you do?

If the content is live via satellite you control it by scrambling the signals. If it’s on a VHS tape you attempt to control distribution through reputable brokers. If it’s on DVD you encode each disk with the regional release code for that area so that a DVD pressed for the North American market can’t be played on a DVD player in Japan for instance (and vice versa).

But what about ‘broadcasting’ on the Net?

San Francisco-based Digital Island has developed the first geographically aware global streaming media network, which detects with 96 percent accuracy what country a viewer is in. Therefore, among other things, it can accept or reject a viewer’s request for content based on where they are. It’s called geofencing.

The following information is taken from the online press release of Digital Island:

“TraceWare is also an essential foundation for Digital Rights Management (DRM) on a global scale. Implemented either as a standalone service or as a component of an industry-specialized DRM solution, TraceWare provides unparalleled accuracy for use in real-time e-Sales transactions.

“For most types of digital content, distribution rights vary based on geographical boundaries. Detecting and enforcing country-specific distribution policies has previously been difficult on the Internet.

“The economies of scale for streaming media are driving down prices for the service to the point now that its on the verge of mass-market availability on a global scale. One of the recent successes was the historic webcast of ABC’s The Drew Carey Show, which was handled by Digital Island.”

Companies hoping to leverage their content infrastructure are looking to ‘wireless’ applications more and more.

Although there are competing standards (aren’t there always) and some countries haven’t fully bought into one or the other, Europe outpaces the rest of the world in wireless application rollout.

WAP (Wireless Application Protocol) versus GSM (initially known as Groupe Spécial Mobile now generally as Global System for Mobile communications) are heating up. Today in Helsinki, Finland a young boy or girl can be riding the trolley car across town while simultaneously playing with their GameBoy and speaking to a friend in another part of town using the same device!

The ability to send images (still pictures and moving video) and sound to your cellphone, is near.

Whether you wish to believe it or not, there is a developing consensus within the ‘merged media’ conglomerates that goes something like this:

“This is not a battle of attempting to create content specifically for the web instead of television,
but finding a way to marry the two.”

Among many others, George Winslow, writing in the NATPE edition of World Screen News, quotes the following influential people in support of this ‘science’:

“There is an idea, which fortunately is starting to wane, that the Web will hurt television as we know it today, ” notes Jeff Mallett, the president of Yahoo! “Obviously, those who are in this business are realizing that it is not going to be either television or the Internet – the merging of these two is going to be complementary. The winners are going to be able to use both and make them complementary.”

Robert Montgomery, the president of the Americas at The Fantastic Corporation notes that,

“When you go to broadband… you have opportunities to tap into all of the existing revenue streams in the television media – advertising, subscription, pay per view, E-commerce, etc. It has the beneficial features of all the other media.” 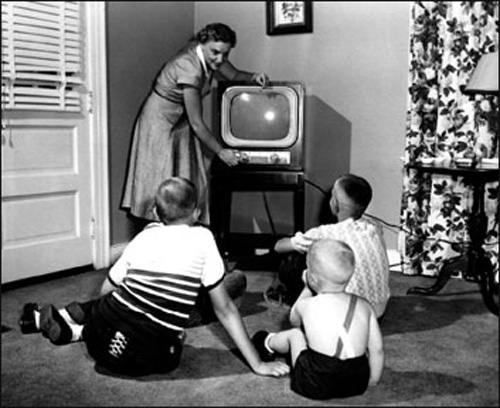 On April 14, 1912, the day RMS Titanic sank in the frozen North Atlantic, a 21-year telegrapher named David Sarnoff was working at the Marconi Wireless station atop the Wanamaker Hardware building in New York City. It was one of the Big Apple’s tallest buildings at the time and therefore advantageous for radio signal propagation. He sent and received wireless messages for seventy-two straight hours, gathering names of survivors as anxious relatives of Titanic passengers congregated on the streets below. That incident, combined with swift promotion through the Marconi company lead Sarnoff to form his own company with funding from General Electric. He called that company the Radio Corporation of America (RCA).

The RCA stock market symbol became known by both bankers and barbers from New York to San Francisco. Others from around the world knew of RCA through newspapers. The telegraph was in general use, radio was emerging and battles between competing companies would all but be silenced by RCA. It had a virtual lock monopoly on ‘wireless’ communications. There was no serious competition in sight.

Although radios were primarily used by the military and the odd hobbyist Sarnoff championed the promotion of the ‘new’ technology as a ‘music box’ for the masses – the iPod of its time. He was right and RCA continued its climb into the stock market stratosphere (comparisons to Apple’s Steve Jobs would be appropriate). 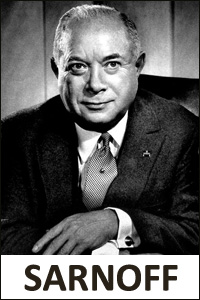 Under the direction of Sarnoff, RCA became Wall Street’s darling high-flyer tech-stock of the 1920s. It made many investors and speculators very rich – my grandfather was one of them.

In essence RCA was the Microsoft or Apple of its day – a leading edge, high-technology company with dominant market share.

However, as we all know, 1929 brought the stock market crash that signalled the Depression.

In the five years prior to ‘The Great Crash’, RCA’s stock soared from about $11 to its September 1929 high of $114 per share. Such was the meteoric success of the stock that it spilt 5 for 1 seven months earlier in that fatal year. That’s an appreciation of 936% in only five years – equal to an annual compound return of a monumental 60%. Also unbelievable was the fact RCA stock had never paid a cash dividend! Investors didn’t care – the stock value increased almost daily. At its 1929 peak RCA boasted an astronomical price-to-earning ratio of 72:1! 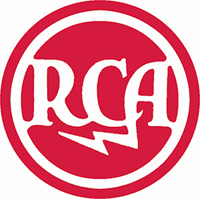 From RCA’s 1929 high of $114 the stock price dropped continuously for the next three years, reaching the basement in 1932 with a share price worth less than $3. This represented a loss from its 1929 peak of 97%. It made many investors and speculators paupers – my grandfather was one of them.

What needs to be remembered here is this: RCA, although the predominant technology leader of its day, lost 97% of its value just as quickly as it had risen. However, even with the loss, and a stock price hovering below $3, and the world in Depression-era turmoil, it continued to be the dominant player.

Nostalgia just ain’t what it used to be!

Increasingly, we live in a world of one-liners, non-sequiturs and sound bites.

“I did not have… sexual relations with that woman”, said William Jefferson Clinton, President of the United States.

How often have we heard or seen that response…? Now, how many times has it appeared in context to the greater issue…?

Humphrey Bogart never said, “Play it again, Sam”, in Casablanca. The banditos never said, “Badges? We don’t need no steenking badges! ” in Treasure of The Sierra Madre (what is it with Bogey and misquotes anyway…?!) 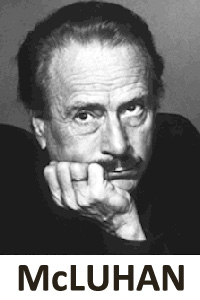 He may have died without ever having known the Internet let alone surf it, but Marshall McLuhan’s statement, ‘the medium is the message’, could have been about the Web. This quote is known to just about everyone, but how many of us can put it in context…? What is the phrase that this oft-quoted nugget is mined from?

Trying to understand McLuhan, in context or out, has driven many to distraction over the years, and probably more than a few directly into analysis. But I can’t think of a better way to end this treatise on content than to take the phrase that turned mass media on its ear more than thirty-five years ago and point it at the Internet…

“The content of any medium is always another medium.”

“The medium is the message because it is the medium that shapes and controls
the scale and form of human association and action.”

“No medium has its meaning or existence alone, but only in constant interplay with other media.”

Marshall McLuhan was the head of the Center for Culture and Technology at St. Michael’s College at the University of Toronto in 1964 when he said those things.

With the conflagration for attention that the Internet has spawned in just a few short years, with the fusion of mediums that is the Internet, if Marshall McLuhan were alive today, would he be saying:

“The modem is the message.”