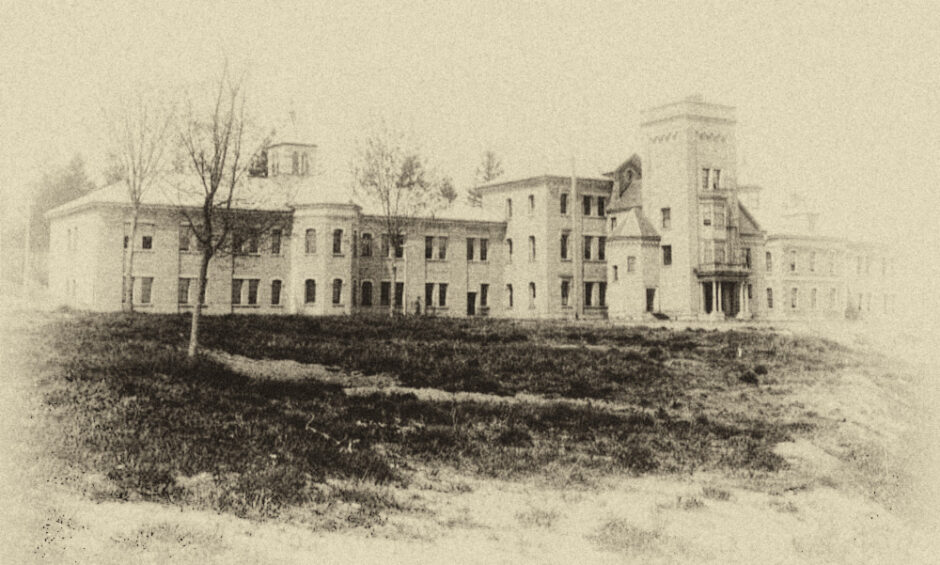 “Well, if they freed me from this prison,
If that railroad train was mine,
I bet I’d move out over, a little
Further down the line,
Far from Folsom Prison,
That’s where I want to stay,
And I’d let that lonesome whistle,
Blow my Blues away.”
– Folsom Prison Blues, Johnny Cash

The old British Columbia Penitentiary stood in the city of New Westminster for over a hundred years.

After prison riots that occurred throughout the middle to late 1970s caused the closure of the by then infamous B.C. Pen, I started polling local and regional politicians requesting access to the jail so I could photograph it. I was turned down repeatedly. Various excuses, both official and anecdotal, were given for the refusal, but I persisted.

The prison, it was said, remained in a state of total disrepair and decay after a particularly nasty riot which resulted in its population being transferred to other correctional facilities across the country. In fact, if reports were to be believed, everything was left where it fell that final day before the prisoners’ relocation. The Pen was officially closed for good in 1980 and all but forgotten. The subject came up in the press once in awhile as to what would be done with the structure and land it sat on, but no one ever seemed to agree on the proper approach.

My photographic interest was historical, certainly. But the Pen was rife with stories about its sordid past, its attempted break-outs and even it’s cemetery which still exists to this day. A young woman who worked at the prison, Mary Steinhauser, was shot and killed by the Emergency Response Team during a hostage taking in 1975. The press had had a field day with that, speculating that perhaps she had been targeted because of an affair she may or may not have had with an inmate.

Sure, all of that was in the back of my mind. But I was also gripped by an intense child-like curiosity. How cool would it be to roam through this giant granite castle taking pictures? Cool. Very cool.

It was late January the year after its closure that I received a phone call from the mayor’s office of New Westminster. Had I received the letter, I was asked. The letter arrived the next day.

In it, I was told that a decision was being made as to the Pen’s future and the first phase of that decision was to turn control of the prison “…and its contents” over to Public Works Canada. If I really wanted to “…go inside and take your pictures…” I’d best do so within the next two weeks. After that, no one would be allowed to go inside and the Pen’s systematic ‘devolution’ would commence; this was as close to ‘permission’ as I was going to get. I seized the opportunity.

I supplemented my one camera and 50mm lens with a rental agreement from a local camera shop and a week later presented myself at the formidable oak front doors of the Pen’s Gatehouse. Struggling with a second camera body, three extra lenses including an 18mm Fish Eye, two bags containing lights, reflectors, a Megablitz electronic flash with battery belt, and a portable power supply, I was met with a hearty laugh when I introduced myself to the two Commissionaires who had been assigned to guard the complex.

“Didn’t they tell you?” one asked. “There’s no power,” said the other. “Been shut off for more than a year. No heat either,” he continued. “No prisoners – no point,” said the first. “I hope you brought gloves and a warmer coat.” I hadn’t.

Official-looking papers were arranged on the one desk that sat in the corner of a small anteroom in the gatehouse. The Commissionaires continued joking while I stuffed the two bags of useless equipment under the desk for safe-keeping. At least they had a small portable heater and a radio powered by a gasoline generator to keep them company. After a hundred years of ‘top security’ and dozens of personnel carrying weapons, the Pen was now guarded by two men without so much as a pocket knife between them. The irony was not lost on me.

After I signed a sheet that said I was to hold all and sundry harmless from any responsibility should I disappear down a rabbit hole or some such, I was given a short lecture about the dangers I was facing by “…traipsing about the grounds of a former maximum security facility…” by myself.

“By myself…?” I said out loud, perhaps a little too high pitched.

“Don’t worry,” said the officer. “The sun’s coming out. Once your eyes adjust to the dark, you’ll be fine.”

Right. No power – no heat – no light. No warmer coat: check. No gloves: check. No flashlight: check. Wonderful.

The second officer handed me a massive ring of keys, just like the kind you see in the movies. And damned if there weren’t several old-style skeleton keys on it.

“Just for show,” he said. “Used to work on some of the interior doors a ways back apparently, but once the prison was modernized…” He allowed his voice to trail off, perhaps realizing that the term ‘modernized’ in this context was entirely pointless. The prison in fact had changed little since the day it had opened in 1878.

The two officers looked at each other in a sort of ‘anything else you can think of’ kind of way. Then, “Okay – that’s it. We’re done at five. Make sure you’re back here by then.”

“Yeah,” said the second officer. “Or you’ll have to sleep overnight in one of the cells!” They both laughed. This was no place for a child-like imagination.

I grabbed a couple of lenses from the big bag and walked outside into the prison yard. The large oak doors creaked and then slammed behind me.

It was early February. Snow was on the ground, and my breath froze in the air. I made the hundred meters from the gatehouse to the main door in short order. I put the red key in the lock and turned. The door opened with ease.

I was going to prison, and that’s all there was to that.

I survived my day in prison wandering the halls, and cell blocks of the old B.C. Pen and the stories all turned out to be true. It was still in the exact same state it was left in after the final riot and relocation. I had been told the only things that had been removed were the mattresses and linens, but there were stacks of them stuffed into one very smelly room. Dampness and mold had taken over.

As a sidebar story to this, I had a robbery in my apartment less than two weeks after doing the tour and taking the pictures. According to my insurance adjuster, about $20,000 worth of ‘household’ items had been stolen, including three large binders of contact sheets and negatives. I mourned the loss of the B.C. Pen materials whenever I thought about it too long. Then, a couple of years later during a move to a new apartment, I discovered a handful of plastic sleeves containing mostly negatives of the B.C. Pen under a large Indian area rug I had inherited.

The pictures aren’t the best quality, unfortunately. With no power and no flashlight, many of the shots were taken in darkness, if not pitch black. I would fire the Megablitz strobe that I had attached to one of the cameras just to see where I was going at times, and this was frequently my only source of instantaneous light when ‘setting-up’ a shot.

Although the pictures aren’t the best, they are still the only ‘officially unofficial’ photographs in existence of the inside of the B.C. Pen before the place was razed and turned into condo units.

The majority of stills from the B.C. Pen can be seen HERE (Part 1) and HERE (Part 2) at my dedicated photography site, HyphenWalden.com. Enjoy.